A Survey of Colchester’s Ironwork 2018 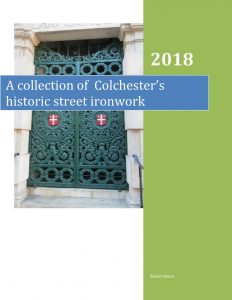 This survey started from an innocent question at one of the Civic Society’s monthly coffee mornings about how many of the cast iron lamp posts are still in the town. Colchester does have a large number of identifiable posts produced by the town’s own foundries in the mid 19th c onwards. Immediately it was proposed that we should undertake a street by street survey to discover just how many survived. Several members offered to assist including myself; and Jo Edwards, our Chair, asked for the survey to extend to the street furniture especially her favourite, the bollards.
The essence of the survey would be those lamp posts that had been cast by the various town foundries to the “Colchester pattern” and which commonly had the foundry name and “Colchester” on the side. The pattern was a wood former which was owned by the Council and would be passed to the foundry which had the current contract to supply castings for the street lighting. Originally these would have all been for gas lights but in due course they were converted to electric lighting.
There are other lamp posts in the town from this period of similar patterns but not marked by a Colchester name. These have been identified in the survey and included in the figures.
I soon realised after a trial that this was a task that could only be undertaken by one person to ensure all streets were covered and in the required format. This became immediately clear also when it seemed obvious to add the other street furniture items that still survived in the town. These would be drains and manhole covers which had the same Colchester foundry names on them as well.
I knew that Sir Bob Russell’s father had undertaken a similar survey back in the 1970’s, but he thought the records had been lost by the Council. I was also pointed to a very valuable source, a book on Colchester’s street lighting by Ken Rickman. I discovered that he lived very near to me and I was able to buy a copy of his book . I also discovered that the Russell survey report survived on line and I was able to use his results as a matrix for my searches across the town . I am indebted to Mr Ewan Russell for his work and it has been my aim to follow and find items in the subjects he listed. I have managed to find some that he missed but several have disappeared especially the lamp posts, which are going all too rapidly.
The aim from the beginning has been to try and ensure that those cast iron lamp posts that we still have will be there for the future to enjoy and admire. Sadly, street lighting is currently in the care of Essex County Highways who have no program for the repair and maintenance of the cast iron columns and they are being left to deteriorate. Many are in a sorry state, not having received as much as a coat of paint, since County Highways took over responsibility from Colchester more than fifteen years ago. When a one hundred to one hundred and fifty year old cast iron lamppost is damaged it will be pulled out like an old tooth and replaced with a steel one with a life expectancy of just fifteen years.
Robert Mercer