Keeping A Close Eye On Colchester

‘Eyes and Ears’ is an initiative that aims to make a real difference to the everyday ‘look and feel’ of Colchester. It encourages everyone to keep their eyes and ears open on their daily travels around the town and to be on the look-out for things that need flagging up for action. Perhaps some graffiti has appeared, perhaps some fly-tipping, Is there an area that doesn’t seem to be on the council’s regular cleaning schedule? Have you noticed an overflowing roadside drain or a leaking pipe?

Alternatively, it might be something that the Essex Highways team need to be alerted to – an uneven, broken or rocking paving stone, a pothole, a bus stop that needs attention, some redundant or damaged street furniture, an unlit street light – or a light that never goes off.

These are the types of day to day issues that residents and visitors notice, the sorts of things that often cause adverse comment or lead people to believe that the town is scruffy and uncared for.

Lots of us notice and comment but how many people actually report the issue? Perhaps we don’t really know who to report it to. Perhaps we think someone else will report it or it’s too difficult – or a waste of time as nothing will be done about it anyway.

The Civic Society ‘Eyes and Ears’ initiative sets out to challenge the perception that nothing can or will be done about the everyday issues that do much to detract from the positive images that make Colchester ‘A Town Worth Living In’.

Members of the Society report, and pursue, hundreds of such issues a year. Once something has been reported we continue to follow it up until, hopefully, it gets resolved. Inevitably, some things take a while to sort out and, disappointingly, some issues just seem to run on and on.

However, more often than not progress is made and matters do get sorted, and often quite quickly once the matter has been reported.

Do you want to live in a cleaner and greener town? Do you want Colchester’s residents and visitors to see the town at its best? Please support The Society with its ‘Eyes and Ears’ initiative and report issues to the relevant stakeholders, some of which are listed below.

If you would like to know more, or get involved with this initiative please contact Sheila Anderton following this link

For recent examples of the work of our Eyes and Ears team follow the links below. 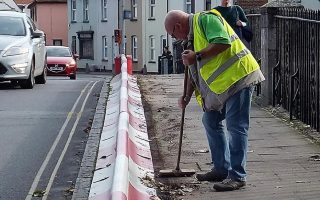 Essex County Council installed red and white metal barriers on East Bridge, East Street due to concerns over the structure of the bridge and supposed unauthorised parking. Since their installation the barriers have become more and more of an eyesore and residents have called on County Hall to deal with the issue, particularly as this is a conservation area and a main gateway into town. The end drums have missing lids which allow them to be used as litter bins, sections of metal tubing along the tops need replacing and silt and weeds have built up over the whole stretch. 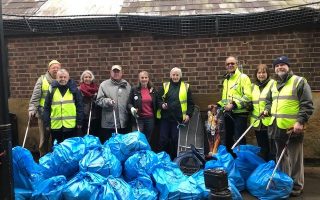 The Great British Spring Clean is a national event run by Keep Britain Tidy. It has a simple aim: to bring people across the country together to clear up the litter that blights our towns, villages, countryside and beaches. The Colchester Society registers and takes part annually in a bid to keep our own town free of unwanted litter. Dates for 2022 are: anytime between 25th March and 10th April. Check the Keep Britain Tidy website for further details.  Society members are focusing on two specific dates for our main efforts: the mornings of 31st March and 7th April. Please contact Sheila or John at sheilamanderton@gmail.com or jcollett17@gmail.com  if you’d like to join in 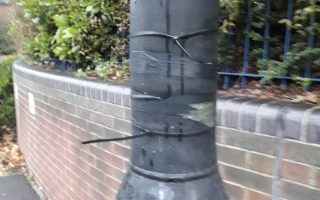 ‘The Society has mounted a campaign to remove thousands of irritating plastic cable ties used to fasten notices to lamp and sign posts. For some reason the ties were not removed when the notices about such things as road works, street closures and parking restrictions were taken down – or fell off. Some posts had amassed several ties following repeated postings. This is difficult to understand as they are quick and easy to remove. 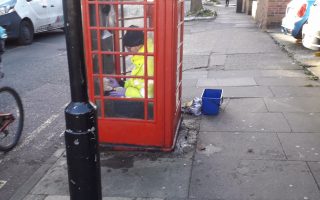 Back in November 2018 we appealed for help from the public to report to us any telephone boxes in need of repair. Here is an update from our chairperson Jo Edwards, as published in the Colchester newspapers.