Colchester Civic Society believes that Public Footpaths, Byways, and Bridleways (collectively Public Rights of Way) are important features in any locality and not least here in Colchester, Britain’s oldest recorded town.
Many of them are ancient features on the local landscape – routes that have been used for centuries by generations of residents and visitors to, from and through Colchester. They are not just “countryside” features either. There are public Rights of Way in and around the town centre.
Colchester Civic Society believes that the network of Public Rights of Way should be protected, cherished and expanded. It believes it’s important to properly consider rights of way issues as an integral part of local planning and development work and wherever possible to seek to extend and link up the network of Public Rights of Way in order to increase public access and environmentally friendly travel options.
It’s not unknown for public Rights of Way to be blocked, become overgrown and impassable, or occasionally for their existence to be ignored or overlooked when new developments are being planned and built.
Public Rights of Way are the responsibility of Essex County Council and are, or should be, protected by law. Their existence cannot be “extinguished” by lack of use, by obstruction or by building over them. However changes can and are made by Essex County Council as the Highways Authority, by giving public notice and considering any representations made before making an “Order” under the governing legislation.
Colchester Borough Council also has an important role to play as the local Planning Authority.
Members of the Society regularly walk Colchester’s network of Public Footpaths and other Rights of Way and make appropriate representations to both Essex County Council and Colchester Borough Council in response to formal public notices. Also, with regard to more routine matters concerning such things as maintenance and obstruction. We welcome help from all members of the public. Please report any issues you come across using this email address info@colchestercivicsociety.co.uk
Not all footpaths and tracks are Public Rights of Way and not all Public Rights of Way are  ‘made up’, or the route clearly marked on the ground or sign-posted – although many are.
Essex County Council do however maintain a very useful online interactive PROW map.:
https://www.essexhighways.org/getting-around/public-rights-of-way/prow-interactive-map.aspx

Some examples of issues that have been picked up and reported by Civic Society members:

There were two issues with this Public Right of Way. The first photo clearly shows a fence and tree line blocking the clearly marked route of the public footpath. The second photo shows a field of growing crops where the route of the public footpath had been planted over and is unclear despite the marker post. Both these issues were very longstanding. Representations were made to Essex County Council and the pressure was maintained for well over a year. The representations were, in the end, effective and the Council made a formal Order under the Highways Act to divert the formal route of the footpath. The public footpath now follows a nearby surfaced path that most people used anyway but wasn’t in fact the legal right of way. Resolving this anomaly by means of a formal diversion order rather than – for example taking enforcement action to unobstructed the previous formal route was a pragmatic, uncontroversial and effective solution to the problem. 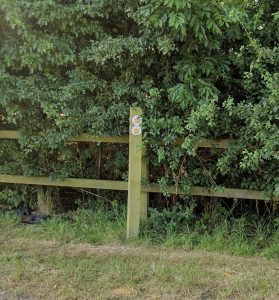 These two photos show how the “Eyes and Ears” and ”Public Footpath effort of the Civic Society often coincides and crosses over. Shopping trolleys are regularly abandoned on this particular public footpath – and we regularly use the “Trolleywise” Smartphone App to report these for collection. But it’s not just shopping trolleys that get dumped – further down this path – as with others, we often make representations to the local Colchester Council Zone Teams about fly tipping . It’s great to be able to give praise where its due and this is a case in point – fly tipping shown in the second photo was cleared the very same day by the Zone Team . A job well done. 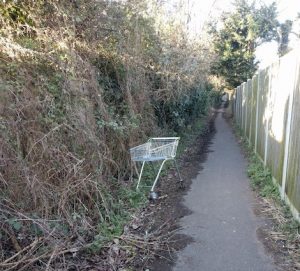 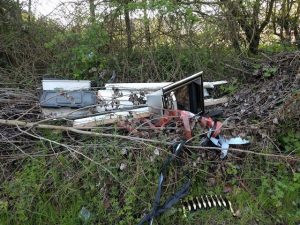