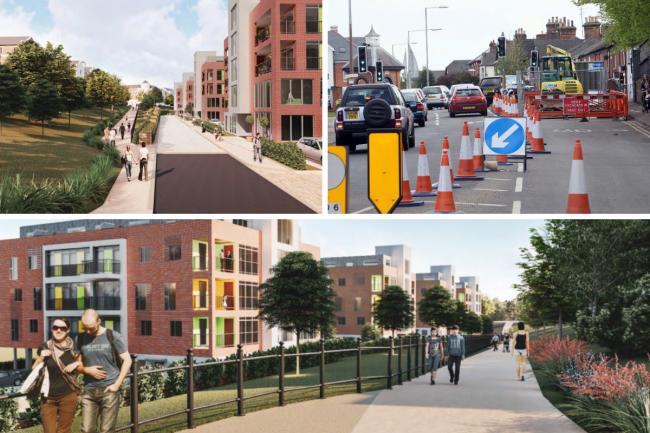 The long running saga of the application to build 120 flats in blocks on land to the west of Brook Street was passed at a Planning Meeting on June18 2020, having been recommended for approval by the Planning Department.
The application dates back to the 7th January 2019 and has undergone various stages of alteration and change to try and address the many issues such an outright ugly and overlarge development has produced.
The Society has objected and commented at least three times during this tortuous process and still it is our opinion that this town and its inhabitants deserve considerably better quality housing than this scheme which has been likened to the worst of Eastern Europe .
The fundamental issue is that planning permission was granted in 2016 to build 66 apartments on the site, 58 of which were to be in two blocks.
This was then shown to be unviable and the plan cunningly transformed to a scheme providing 120 units instead.
Naturally this increase could not be achieved except by compromising the privacy of those living there as well as their amenity provisions, parking for cars and parking for bikes . These are all standards that are designed to be met by developers.

Even the latest applications drawings are still attempting to achieve privacy by adding tiered balconies to the blocks in the form of galvanised add-ons to the original design.

For the gullible amongst us and who know Brook Street, there are learned statements from experts denying that any traffic increase from the residents or building activities will have any detrimental effect on the air quality or traffic density.

This week the Gazette has published a piece about the scheme which has caused the usual outcry of comments on Facebook and their own website against this scheme. Sadly none of these writers have felt it necessary to discover earlier or even to object on the Planning website . This has been left to the modest number of local residents who have and Colchester Civic Society.
The challenge is how do we motivate and inform more of us to make our opinions known and in a timely fashion so that it can make a difference, like the Alumno student housing application.