The painting of Colchester’s cast iron lampposts is underway 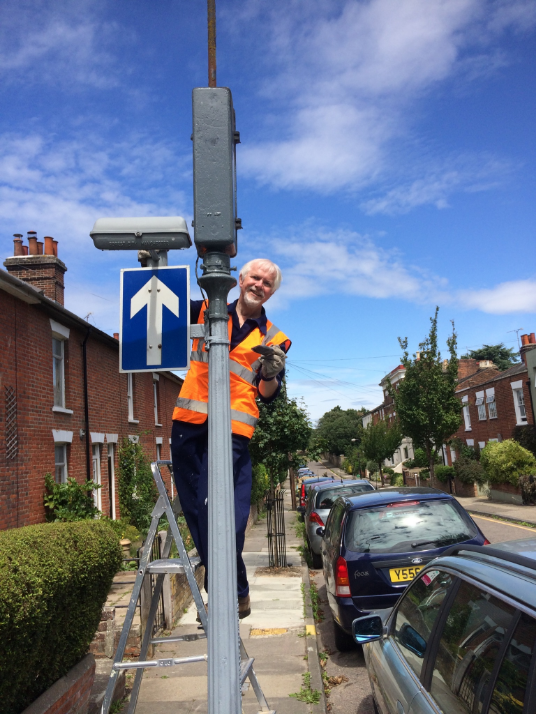 Written for us by Bob Russell, the article printed in the Gazette on Tuesday 10th August and reproduced below,  explains that the painting of some of Colchester’s Cast Iron lampposts has almost been completed in Roman and Castle Road.

The Irvine Road Area Residents Association are now planning to follow on and repaint the lampposts in their area, assuming permission is granted by Essex Highways. Also it looks likely that another group based in the Beverley Road area will be seeking permission to paint their cast iron lampposts.

The Civic Society are planning to buy tools and equipment for use on these repainting projects and also to assist in arranging for permission from Essex Highways. If you or your community group are interested in restoring the cast iron lampposts in your area, then please get in touch by contacting John Salmon using this address  johnsalmon@colchestercivicsociety.co.uk 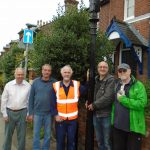 Residents in two of Colchester’s oldest streets were so dismayed at the condition of the lamp posts that when Essex County Council refused to repaint them they formed an action group – and painted them, a total of 18 cast-iron columns all made in Colchester dating back to possibly the end of the 19th century. They originally had gas lamps.

It was done, however, with the full approval of Essex Highways who provided the specialist paint and gave advice.

The eight who did the painting are all members of Roman Road and Castle Road Residents’ Association, two roads of Victorian housing off the top of East Hill next to the Castle Park.

Six are also members of Colchester Civic Society who partnered the project with the Society’s insurance policy providing protection if there were any mishaps.

Mr Robert Mercer, from the Civic Society, has carried out a survey across long-established parts of the town and updated an earlier survey from more than 40 years ago by the late Mr Ewart Russell, a retired Colchester schoolteacher.

This reveals that a lot of the Colchester-made cast-iron columns, some more than 125 years old, have been removed and destroyed during the past four decades because they were damageed or no longer compliant with new electric lighting equipment.

A worrying statistic is that over the past four decades around 500 of the then surviving heritage lamp columns have been lost, dropping the total from 800 to just over 300.

Mr Mercer worked with Mr John Salmon, Chairman of the Residents’ Association who is also on the Executive of the Civic Society, in preparing the re-painting project. Mr Salmon liaised with Essex Highways on permissions and work methods for the volunteers to follow.

Both men praised Essex Highways for their co-operation. Essex Highways do not have a budget for repainting heritage lamp columns and welcomed the offer from the Roman Road and Castle Road Residents’ Association to undertake the work in a voluntary capacity.

In addition to the paint supplied by Essex Highways, financial support was also given by the three Castle Ward Borough Councillors – Simon Crow, Mark Goacher and Nick Barlow – from their “locality budgets”, £175 each. This enabled the purchase of specialist equipment to strip layers of paint from the columns, and also safety and protection equipment for the volunteers.

Mr Salmon said: “Essex Highways provided the topcoat and under coat, but I had to spend £90 on primer. We used a lot, because most of the posts were stripped back to bare metal.

“To begin with I was hopeful of persuading Highways to change their policy and to take responsibilty for the lamp-posts. They were looked after by the Borough Council until 2015 when Essex Highways took over.

“I finally settled on trying to paint them ourselves, when it became clear that this was not going to happen.”

During the 19th century and into the opening years of the 20th century it was the policy of Colchester Council to place orders with local foundries to make cast-iron columns on which gas lamps were fitted, using the same Council-owned mould but with the different name of each manufacturer displayed on each column.

Although more than half the columns have been lost over the past 40 years, most have survived in Roman Road and Castle Road which is in a Conservation Area. Others can still be found elsewhere in residential areas of Colchester which pre-date the First World War (1914-18) and the Civic Society is now hoping that the re-painting success will encourage similar projects elsewhere.

Mr Mercer said: “Such has been the success of the re-painting of the historic lamp columns in Roman Road and Castle Road it is good news that the Irvine Road and Athelstan Road Residents’ Association wish to do the same with their Colchester-made cast-iron columns.”

Mr Salmon added: “The Civic Society is very keen to widen this out as far as possible and preserve as many of our unique Colchester lamp columns as possible. So we would like to appeal to any community groups in town who might be prepared to get involved in this.

“Arrangements will be required by Essex Highways and there is a process which will need to be gone through. The Civic Society will help any group wishing to do this and provide guidance on what tools and equipment are needed as well as how to organise and carry out the work.”

Mr Salmon said the work had to be undertaken taking into account the coronavirus pandemic social distancing requirements. “Working in pairs, all eight volunteers were supplied with good quality carbon filter respirators and goggles, as well as wire brushes and both battery and mains powered tools, plus a hammer and chisel, step ladders and gloves. A hot air gun and angle grinder also helped remove several layers of paint going back more than 100 years.”