Just Published A Survey Of Colchester’s Ironwork by Robert Mercer 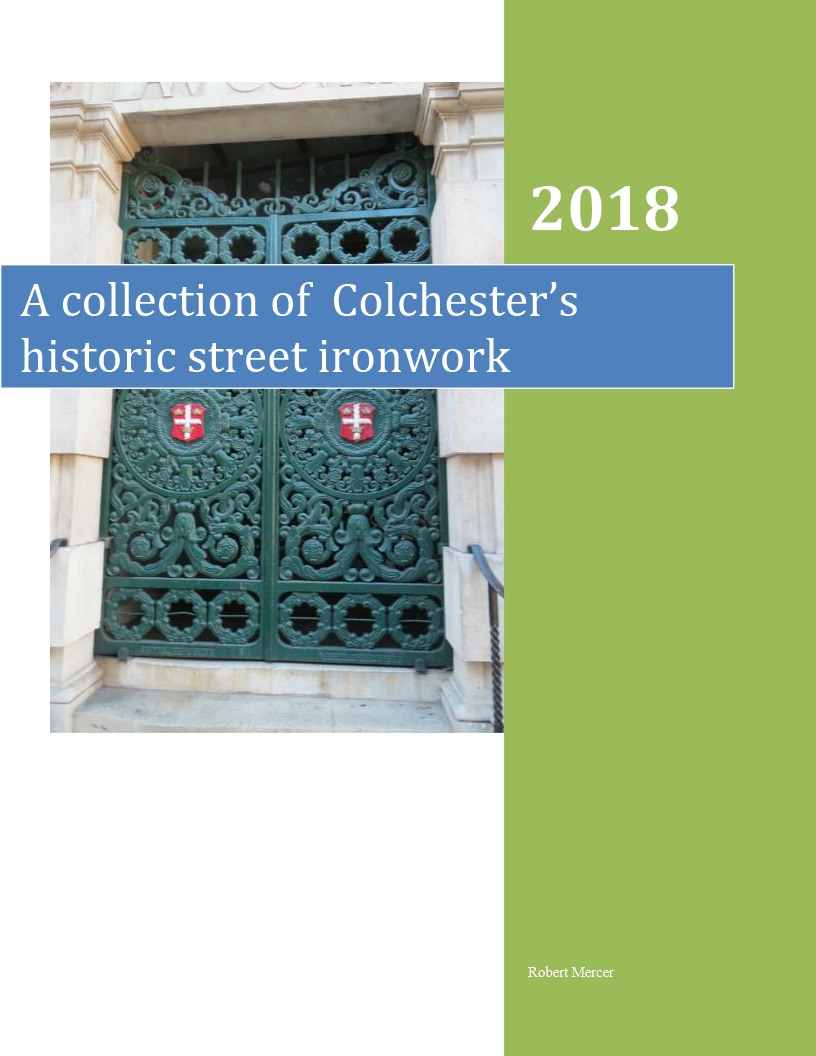 A survey of Colchester’s Iron Work.
This is a comprehensive survey by Robert Mercer covering all forms of cast iron work, including lampposts, bollards, railings, manhole covers and a variety of other forms of casting, which have survived in Colchester. However, as Robert points out in his own introduction, the essence of the survey is the recording of surviving Colchester Pattern Cast Iron Lampposts made for Colchester Council by a number of Colchester Foundries during the nineteenth and twentieth centuries. These lamppost are easily identifiable because they commonly have the foundry name and Colchester on the side. The pattern was a wood former which was owned by the Council and would be passed to the foundry which had the current contract to supply castings for the street lighting. Originally these would have all been for gas lights but in due course they were converted to electric lighting.
We hope to use the results of the survey as a basis for a dialogue with Essex Highways, with a view to finding some way to conserve at least some of our diminishing stock of Colchester made cast iron lampposts. We regard them as a significant part of Colchester’s Heritage and as such should not be allowed to be lost through neglect. At the time of Ewan Russell’s survey in the late 1970’s and early 1980’s there were over 550 original Colchester made lampposts on our streets. Today that number is down to 300. At that time Colchester Council maintained the posts, repainting them and replacing damaged posts from a stock of spares. When County Highways took over in …. this all stopped and they have not had as much as a coat of paint in all this time. As a consequence many are now in a dilapidated state, with large areas of rust and peeling paint.
We aim to try to ensure the future of these posts in any way possible, including “ Local Listing “ from Colchester Council, which might then lead to the greater powers of national listing. But our primary aim is to find some way for voluntary groups such as Residents Associations and The Civic Society to work with Essex County Highways in finding a way to restore and maintain at least some of these cast iron lampposts.
Roman and Castle Road Residents Association are already collaborating with County Highways to help maintain pavements and trees in their conservation area. We hope that a way forward may be found for extending this collaboration to the restoration and long term maintenance of cast iron lampposts in those roads.
Colchester Civic Society stands ready to play a part in such a collaborations and we invite other groups and individuals with an interest in preserving Colchester’s heritage to join us in this venture.