SWITCH OFF TO TAKE CARE OF YOUR AIR 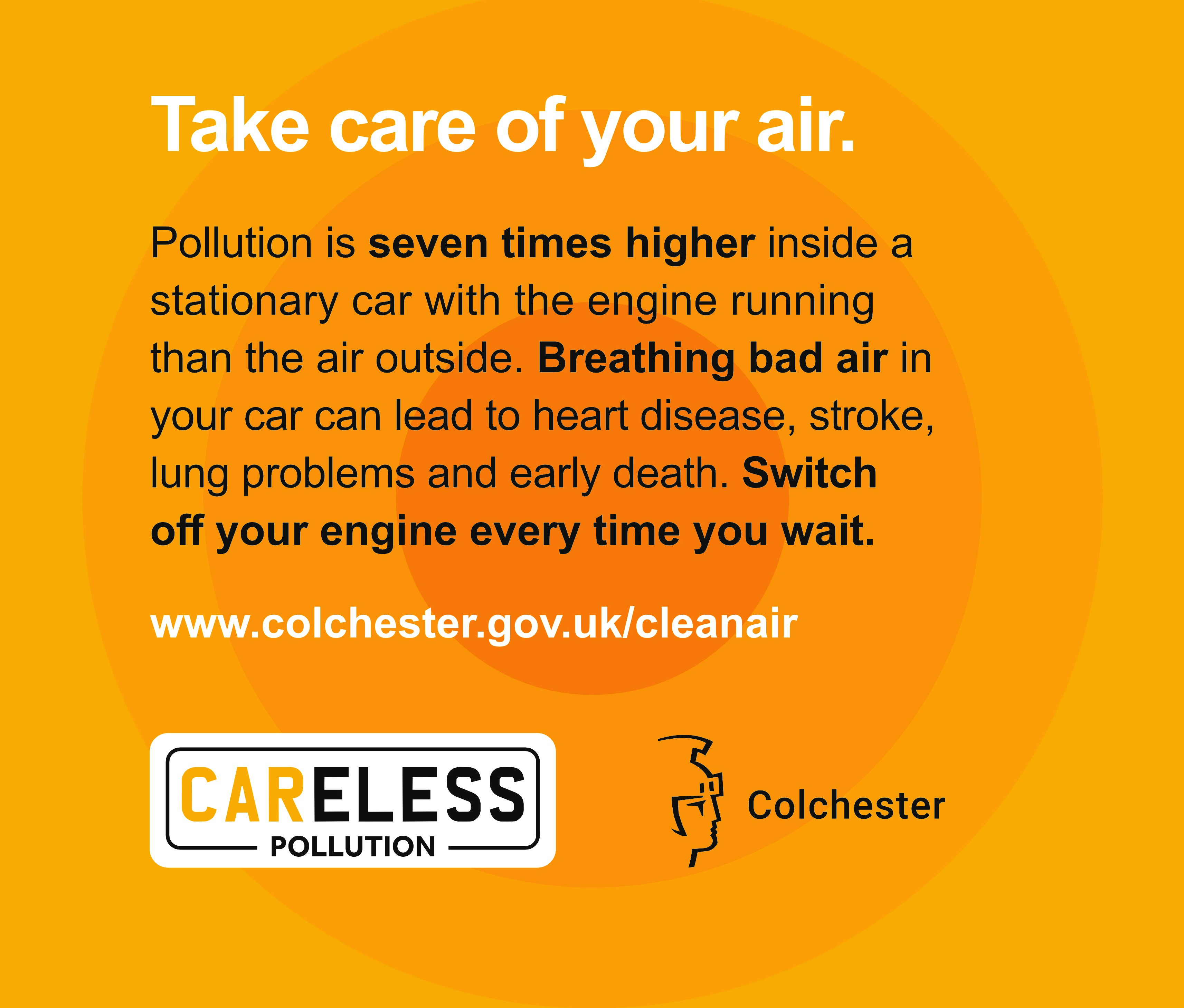 A new Colchester-wide campaign has launched to encourage drivers to switch off their car engines while they wait at traffic lights, level crossings or outside schools, to improve their own health and help reduce air pollution in the town.

The campaign, CAReless Pollution, comes as research (1) shows 87% of local people are concerned about air quality in Colchester and 41% think the town is highly polluted.

CAReless POLLUTION, is urging drivers to adopt better driving habits and switch off their engines while waiting, in order to reduce the risks associated with breathing in polluted air. Research carried out by the University of Surrey has found that pollution inside a stationary car with the engine running is seven times higher than the air pollution outside the car (2). Currently only 15% of drivers regularly switch off their engine when their car is not moving and 20% override their car’s automatic switch off technology (1).Switching off your car engine reduces emissions which brings an important health benefit to everyone inside the car and could save you money on fuel.

Leaving the engine running while sitting at the traffic lights or queuing in traffic is often an unconscious, careless action taken without any thought or attention to the potential harm it may cause to your own health or to the health of loved ones. The campaign aims to explain the link between exhaust fumes and poor health, to demonstrate that small actions like switching off your engine can make a difference to your own health and those around you. Air pollution causes the development of heart disease, stroke, respiratory disease and lung cancer, all of which lead to reduced life expectancy.

Funded by the Department for Environment Food and Rural Affairs, CAReless Pollution will run until May 2021 and includes events in and around Colchester working closely with local schools and businesses to change people’s car driving behaviour. For more information or to get involved in the campaign please visit: www.colchester.gov.uk/cleanair.

What is the campaign?
CAReless Pollution is a new campaign in Colchester that is urging drivers to adopt better driving habits and switch off their engines while they wait at traffic lights, level crossings or outside schools, to improve their own health and help reduce air pollution in the town.
Why is the campaign called CAReless Pollution?
Research among local people found that most people who leave their car engine running while sitting at the traffic lights or queuing in traffic, do it without really thinking or paying attention to its potential harm. We wanted to emphasise that while it is an unconscious, or careless, action it produces consequences in the form of increased pollution and risk to health.

Why is the campaign needed?
In Colchester there are three Air Quality Management Areas (AQMAs) where pollution levels exceed national guidelines. The AQMAs cover the town centre and the residential areas of Brook Street, Magdalen Street and the lower end of Mersea Road.
Air pollution is an ongoing issue in Colchester and can cause both short term and long term affects on health as well as impacting the environment and the economy. Air pollution reduces life expectancy and is linked to 1 in 20 deaths in Colchester. The main source of Colchester’s air pollution is exhaust fumes, namely Nitrogen Dioxide. Air pollution can be 30% higher outside schools because of idling cars. Running your car whilst stationary and parked is also illegal.
(Source: Public Health England, 2014)
Who is the campaign targeted at?
The CAReless Pollution campaign is aimed at people who regularly drive through Colchester town centre. This includes people who live in the area and drive, those who drive in and through the town to get to work, those who drive around town as part of their job and parents who keep their engines running while waiting outside the school gates.

What is the aim of the campaign?
We are urging drivers in Colchester to change their driving behaviour and switch off their engines when they are parked or stationary, particularly outside schools and within Colchester town centre.
Why is the campaign focused on health messages and not the environment? Research among local people showed that people care most about ‘protecting the health and wellbeing of myself and those I care about’ as opposed to actions to protect the environment. The campaign therefore focuses on improving understanding that drivers contribute to air pollution, and that breathing bad air can cause the development of heart disease, stroke, respiratory disease and lung cancer, all of which lead to reduced life expectancy. In Colchester 1 in 20 deaths is linked to air pollution and the main source of air pollution in the town is exhaust fumes. Switching off your car engine is a small, simple action that brings an important health benefit to all car drivers and everyone inside the car. By reducing air pollution there will also be important environmental benefits.

Why has the figure you quoted for the level of pollution inside a car changed from 12 times higher to seven times higher?
There are different sources of evidence that confirm that air quality inside a car is worse than the air quality outside a car. Yet, there are a wide range of variables that can impact how much worse it is:
temperature/ weather conditions, type and age of vehicle, condition of engine, distance from car in front while idling and many more. It is therefore extremely complicated to provide a single consistent figure.
For the purpose of this campaign, we reviewed scientific research papers to determine as accurate a figure as possible which could be substantiated and referenced. As a result of this process, we decided to use the figure ‘seven times higher’ based on the findings of research done by the University of Surrey in 2016 and published in the Royal Society of Chemistry’s Environmental Science Journal. Figures of up to 10 and 15 times higher have been quoted in news articles and government papers.

Who is running the campaign?
The campaign is being run by Colchester Borough Council. It is being supported by a range of local businesses, organisations, charities and residents across the town.

How is the campaign funded?
The campaign is funded by a grant from the Department of Environment Food and Rural Affairs (DEFRA) as part of a two year behaviour change project to tackle pollution in the borough.

How long will the campaign run?
The campaign will launch on Thursday 8 October 2020, National Clean Air Day. It will run until May 2021.

How can I get involved or find out more?
For information about how to become involved in the campaign or to download materials for use in your workplace, visit www.colchester.gov.uk/cleanair

Fiction: If I sit inside my car I am protected from air pollution outside
Fact: Air quality inside a car is up to seven times worse than the air quality outside. This is because you are sitting in a plume of exhaust emitted from the car in front of you, which is sucked through your car’s ventilation system into your cabin. (Source: Concentration dynamics of coarse and fine particulate matter at and around signalised traffic intersections, Kumar P. & Goel A., 2016)

Fiction: Sitting in my car with the engine running doesn’t directly damage my health
Fact: Air pollution INSIDE a stationary car with the engine running is up to seven times higher than the air pollution outside the car, so drivers and their passengers are unnecessarily breathing in poor quality air. You can take responsibility for your own health by switching off your engine every time you wait. The main source of Colchester’s air pollution is exhaust fumes. Air pollution is recognised as a contributing factor in the development of lung conditions, heart disease and cancer. It also reduces life expectancy and is linked to 1 in 20 deaths in Colchester.