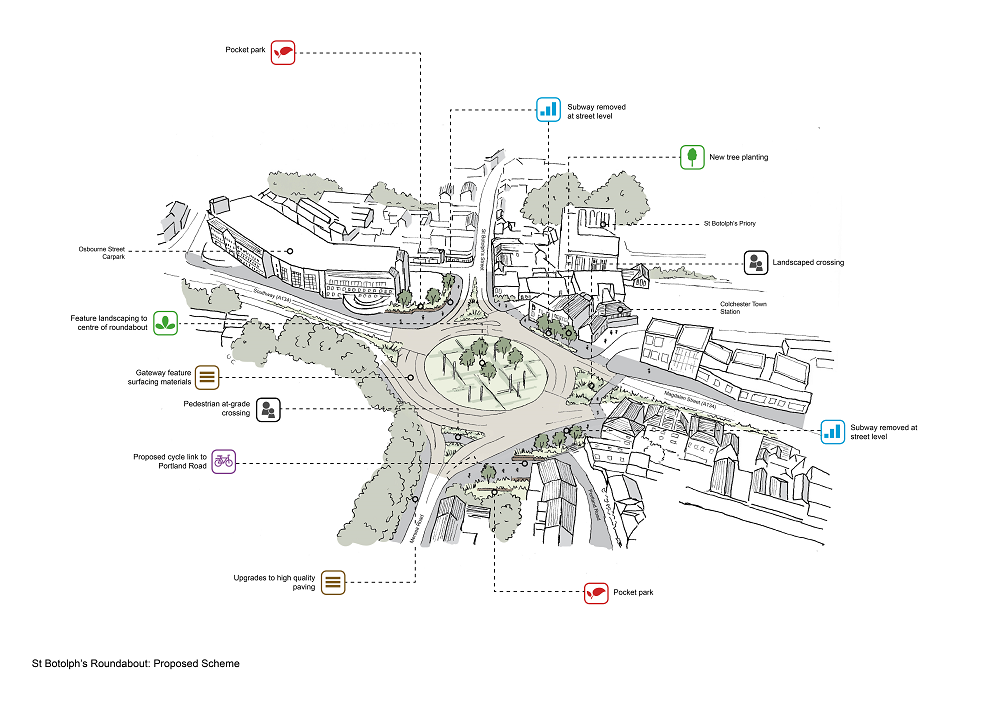 The current proposal, by Essex Highways own admission is a short to medium term change which will cause major disruption to a key part of the town’s road network while the work is carried out; and the end result promises little or nothing in terms of enhancing traffic flow, while reducing the options for pedestrians to just one toucan crossing between North and South. Also it does nothing to aid cyclists.
We would like to see a major rethink in which Essex County Highways consults with the Borough Council in order to draw up a masterplan for whole area, which integrates plans for the St. Botolph’s junction with those being developed by Colchester Borough Council for The Britannia Car Park, St. Botolph’s Priory, the Vineyard Gate development and the Bus Station. This should also include measures to improve traffic flow for vehicles entering St. Botolph’s from Mersea Road. The northern end of Mersea Road, from Napier Road to the St. Botolph’s junction, is barely adequate at present and will need major changes if it is to cope with the increased traffic generated the proposed developments at Middlewick.
Highways appear to have ignored a scheme drawn up three years ago by the Borough Council and currently advocated by Lee Scordis, (County Councillor for Abbey Division) in which the current mix of traffic lights and roundabout is replaced with a lights only scheme that offers the reclamation of a large parcel of land in front of the St. Botolph’s Hotel and provides the opportunity for major improvements to this rather run down area, while also improving and enhancing the experience for pedestrians and cyclists at this major gateway to the town centre. ( follow this link to view this plan :  St Botolphs Circus Final Masterplan)
Pedestrians converge here to enter the town from the Town Centre railway station, the new garrison developments via Mersea Road and St.John’s Green and also from the east of the town via Military Road and Magdalen Street. Current housing developments in Magdalen Street and proposals for further major developments of housing on MD land at Middlewick will place further pressure on this junction and so we should be seeking a long term solution which attempts to take these into account.
We think this Borough Council scheme offers a promising basis for developing a radical redesign in which all these factors are taken into account.
We feel the Highway Authority should not have left it so long before producing their scheme, given that the section 106 money from the Garrison Development will be lost if it is not allocated by sometime next year. However in our view, if it is not possible to draw up a more satisfactory plan and find adequate match funding for this in the time available, then it will be best to opt for a more limited plan for St. Botolph’s roundabout.

Such a plan would in our view
• Retain the underpass from the south east to the north-west corner, where the ramps are available for push chairs and wheelchairs etc.
• Fill in the underpass outside the St.Botolph’s Hotel and provide a broader and more attractive pedestrian access to St.Botolph’s Street.
• Modify the pathway and planting in the area in the centre of the roundabout to discourage loitering, such as removal of walls and seating. And also improve the lighting here. It is proven that strategically placed lighting reduces anti-social behaviour at night.
• Install the proposed Toucan crossings on the eastern side of the roundabout.
• Provide a zebra type crossing at the Mersea Road junction to enable pedestrians coming from St. John’s Green and the new garrison developments around Abbeyfields to access the Town railway station. At present many commuters heading for Town Station coming from this direction risk their lives crossing the dual carriageway at the eastern end of Southway.
• Possibly install peak time lights for traffic entering the roundabout from Mersea Road.
• Remove the steps which lead into Portland Road, but retain the ramp. Residents here have asked for this to discourage late night revellers using Portland Road instead of Mersea Road.
• Retain existing bus stops and shelters.