The Launch Of Colchester Plaque Trails 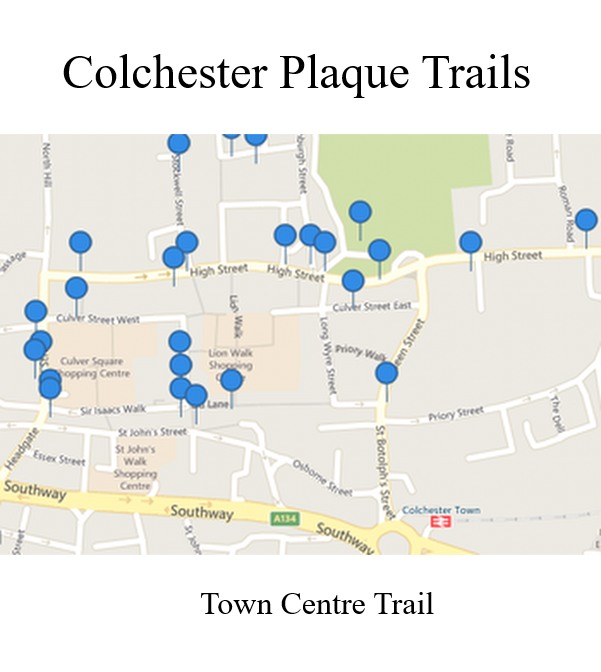 Dave Monk, Deputy Lord Lieutenant of Essex and BBC Essex presenter launched Colchester’s New Plaque Trails on Monday 5th November at a reception in Greyfriars Hotel
Colchester Civic Society member, Alderman Henry Spyvee, put forward the idea to list the town plaques, drawing them to the attention of local people and tourists. The Society has now made this information available to anyone who lives in Colchester or the wider world. The three maps are available to access; select the map you wish to view, then click on a blue marker, this will reveal the history of the plaque and its photograph.
The mammoth project has taken almost two years to complete. It has been undertaken by Jo Edwards, Chair of the Society, Henry Spyvee and Rosemary Jewers. Towards the end of the project other Society members contributed to the research and writing.
Plaques in and around the town have been tracked down, photographed, researched and recorded about the person, event or place it commemorated. As more plaques are erected, they can easily be added to the trails.
Rosemary Jewers contacted Placecheck, who specialise in using markers on an online maps. The maps can be used on a smart phone, tablet or computer – at home or walking about the town. They are an incredible downloadable resource of information which can be used for many applications. The Society is grateful to Placecheck for allowing them to use their website and for their many hours of work making the final adjustments.
Rosemary Jewers said, “It is intended that eventually we will have four plaque trails, but to begin with we are launching three. This plaque project has been a huge operation. We had to locate all the plaques in and around the town before photographing, researching and writing up the stories behind each one. When all the trails are completed there will be well over one hundred and twenty plaques for the public to access.”
“The most memorable moment for me was photographing a plaque on the Loco Shed at Colchester North Station. A member of the station staff took me to the location, which was along the railway track – the plaque commemorates the Cromer Express crash, which took place in 1913. Members of the public will only be able to view the plaque from the train or by clicking on the map marker on our ‘Out of Town trail’.”
Henry Spyvee said, “In researching this, I was amazed at how many plaques there are in and around Colchester. Anyone using our maps will certainly find plaques they didn’t know existed. Some plaques may appear more important than others but all are important to some people.”
Jo Edwards who researched the Quaker burial grounds said, “Having lived in Priory Street for 40 years, I had absolutely no idea that there was a Quaker burial ground under the car park immediately opposite my house. I find it extraordinary that, when the graveyard was full, it was sold as building land and the houses built upon it had cellars!”
The three Colchester plaque trails will be called; Military and Wartime, Town Centre and Out Of Town.

To view the Trails and for further information follow the link on our Home Page.